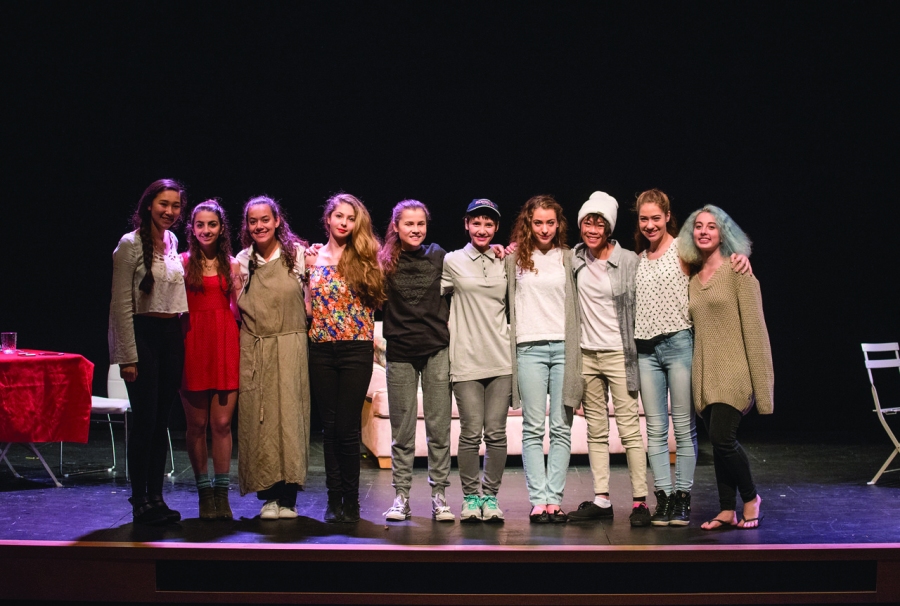 Want a chance to “exercise your leadership and artistic vision?” Over the course of the school year, there are plenty of opportunities for Winsor students to see or participate in theatrical productions. Students can take a number of classes to get involved, like Acting I or II, Directing, and Tech Theater. This fall, students were able to participate in a Winsor production of The Crucible, Belmont Hill’s Guys and Dolls, or Roxbury Latin’s production of Dogg’s Hamlet, Cahoot’s Macbeth. In the fall and spring, Winsor students can participate in plays and musicals as actors, stage managers, and in the tech booth, and they have the opportunity to develop these skills in the theater classes offered at Winsor. Although students take ownership of these productions in their individual work, the shows are still lead by a faculty member.

Winsor’s Upper School winter production, however, is much more student-driven. In early November, Winsor students, grades 10-12, can propose a one act show or a 40-minute edited version of a longer show to direct. According to the application, candidates are expected to have “a strong interest and experience in theater,” “very strong organizational, planning, and communication skills,” and the ability to “collaborate with actors, designers, and crew.”  Mr. Johnson, one of the Performing Arts departments coordinators, encourages prospective directors to take Directing and participate in Winsor productions in any way, prior to their proposal. According to him, the Performing Arts department expects directors to propose pieces that are “engaging and well written, but also something short and fairly easy for a first time director to produce.” If chosen, the student will put on their show at Winsor in February and have the opportunity to debut their production at the Massachusetts Educational Theater Guild’s Festival in April. For Izzy I. ‘18, the festival was an opportunity to “meet students [from other schools] collectively interested in theater” and it was “refreshing [to act] in front of an audience of strangers.” The festival even has attractions outside of drama; Izzy spoke favorably of the food, music, dancing, and MarioKart, as well as the opportunity to meet students from other high schools.

You don’t have to direct to be a part of these productions. Like all Winsor shows, students can act and do tech work if they find that directing is not for them. Both the directors and actors come away from the production with good memories and look back fondly on the experience. “Student directors leave with a much greater appreciation for what it takes to produce a show, as well as a better understanding of being in a leadership position,” says Mr. Johnson, “most students say that directing a student production is one of the most challenging but ultimately rewarding endeavors of their career at Winsor.” Similarly, the actors who have performed in recent shows enjoyed those experiences immensely. Connie Z. ’18 said that “[the overall process] is very chill, and [participating in] the festival is always amazing.” On how the student-led shows differed from faculty-led, Izzy I. said, “there was no adult besides a technical chaperone to supervise us, [so] the entire cast has to take on a new kind responsibility. I relied completely on my classmates, and my castmates relied on me. This kind of trust fostered an especially close connection between all of us.” Connie and Izzy performed in The Other Room last winter, the show directed by Genevieve B. ’17 last winter, and It’s Not You, It’s Me, the show directed by Erin S. ’17 in the winter of 2016.

It may be too late to submit a proposal this year, but don’t worry! Freshmen, sophomores, and juniors still have next year to direct, and all Upper School students can still audition for the show on November 21st and 22nd.