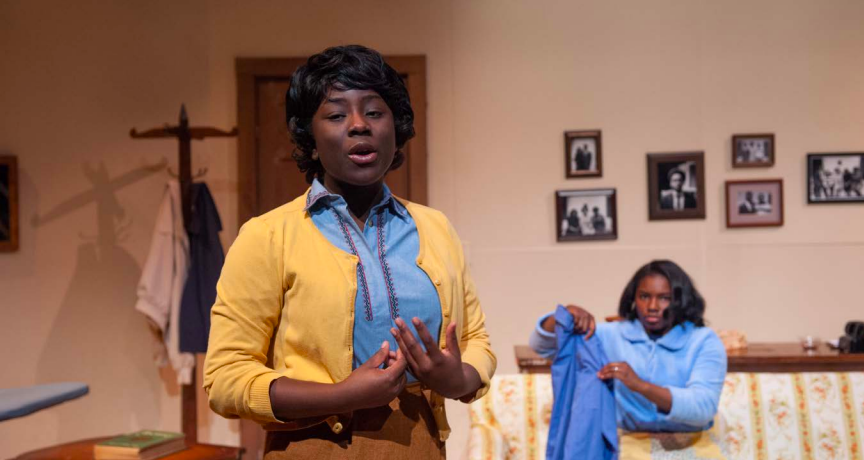 It’s Annie Desmond’s 16th birthday. She gets a tattoo with her two best friends, Talisha and Margie, and dreams about fancy cell phones. She also pledges to become pregnant. Margie is already pregnant. Milk Like Sugar by Kirsten Greenidge, Winsor’s winter play directed by Ifeanyi U. ’20, follows the three best friends as they go about achieving their pregnancy pact. Annie finds her life irreversibly changed as she begins looking at the world through a different lens after becoming friends with Malik and Keera, two people completely different from her usual group of friends. The show was inspired by the “pregnancy pacts” that many people believed occurred in Gloucester in 2008. The principal of the girls’ school claimed they had worked with each other to all become pregnant. Times magazine ran an article on it, and it became legend. In the aftermath of the scandal, the nurse of the school quit her job in protest of the refusal to provide free contraceptives to students at Gloucester High School. Although reports of the pacts turned out to be untrue, a seed was planted for Greenidge, and Milk Like Sugar was born.

The Winsor production is especially interesting due to the cast, which is comprised solely of students of color, as specified in the original script. Alianna T. ’20, who plays Margie, said that “the diversity truly allows the audience to see the POC experience from many different backgrounds.” In its review of the show’s off-Broadway debut, The Village Voice wrote, “Milk Like Sugar’s remarkable features include its locale, an urban, African-American subworld that displays, for once, neither the brutalizing clichés of a poverty-stricken ghetto nor the discomfiting artificiality of a talented-tenth safe haven. Instead, Greenidge populates her story with a sampling of the innumerable young people between those extremes.” “I knew for sure that I wanted to do a majority black cast,” said Ifeanyi, “so I narrowed my selection down to plays that had that distinction. Milk Like Sugar stood out to me because it is a coming of age story about a young woman.” This choice has not come without difficulties: “My biggest worry was not having enough people audition, especially since it was a majority black cast. While this worry did end up happening, it has worked itself out,” she explained. Her goal is to have “everyone know the importance of majority black spaces, especially in the arts –a territory we are discouraged from entering.”

Ifeanyi was also in A Raisin in the Sun, the Belmont Hill winter play last year that featured an all black cast. A Raisin in the Sun follows a black family in Chicago as they navigate harsh financial difficulties and racism. “Raisin definitely influenced my decision,” she said. “I had such an amazing experience that I wanted to do something similar at Winsor.”

Milk Like Sugar is a coming-of-age story showing a girl finding herself while experiencing pressure from friends; Annie creates new friendships that encourage her to strive for more than teen pregnancy and new phones, pulling her away from her best friends. Everyone at some point has made a new friend who is completely different than their usual friends; Nora E. ’21, who is stage managing, said that “it’s a really unique coming-of-age story, and even though the events might not be relatable, the themes of the play definitely are.” Helen B.-J. ’21, the assistant stage manager, brings up the idea that “the girls make the pregnancy pact because they’re searching for someone to love.” The girls do not know where they want to go or who they want to be; they simply want love and to have a good life. The heart of the show is the story of a 16-year-old girl trying to find herself and understand what it is to really grow up, something that every student at Winsor can relate to in some way.

Milk Like Sugar delves into very hard topics. It talks about teen pregnancy, race, and economic issues. The main characters are people of color living in an urban area and come from backgrounds that are not affluent. The title itself is the start of talking about money; it refers to working to buy the expensive, real milk instead of settling for granulated, sugary, condensed milk. Margie is already pregnant, and Annie and Talisha are planning to become pregnant. These are all topics that need to be talked about and resolved in some way, making the show even more engaging. Ifeanyi said that “Milk Like Sugar is interesting because it tackles so many subjects without sacrificing quality. It talks about a lot of tough issues without being artificial or cheap.” Alianna agreed, saying, “One aspect of Milk Like Sugar that I really like is the way that it uses humor to make deep topics approachable for the audience.”

The making of the student-directed play is quite different than one directed by Mr. Johnson. Nearly every aspect of the show is decided by, managed by, and run by Umunna and other students. The show entails five weeks of memorization and blocking and three weeks of putting all the pieces together with tech and costumes. Umunna has to “to prepare the specifics at least a week in advance and balance all of that on top of my school work and other extracurriculars.” She is working with Ms. Pribble for costume ideas, but the actual design of costumes will be done by Lauren P. ’20, India H. ’20, and Ariela R. ’19. Ifeanyi will also be working with Mr. P., Audrey W. ’20, Emily K. ’20, and Tat F.-M. ’19 for tech. Nora and Helen both work with Ifeanyi and have to be at rehearsal everyday to take notes about how the rehearsal is going, help run lines, fill in for any missing actors, and make sure all of the blocking that is decided on is recorded.

See Milk Like Sugar on Thursday, February 7 at 7 p.m. in the Black Box Theater. Tickets will be free at the door.