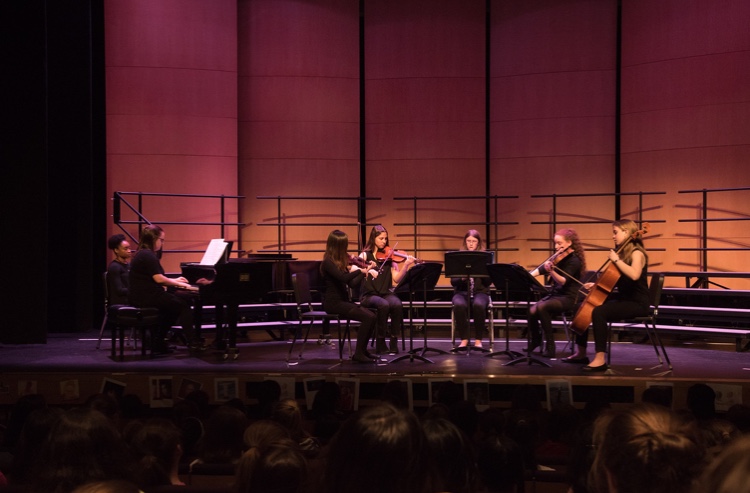 A member of Upper School Chamber Orchestra since it began in 2015, Lydia B. ’19 has been playing piano for most of her life. Winsor students will remember hearing her in winter and spring concerts, Upper School Meeting performances, and last year’s graduation ceremonies. Outside of music, Lydia can be found scooping ice cream at Somerville’s Frozen Hoagies or reading books as a head of Book Club. She is also a head of Students Advocating for Gender Equality (SAGE) and serves as Collect’s secretary. She spoke to The Panel about her experiences as a musician and playing in Upper School Chamber Orchestra.

How long have you been playing piano? What do you like about it?

I started piano lessons in kindergarten. My parents told me I had to learn to play an instrument for at least two years and then I could quit. I actually chose guitar, heavily inspired by the musical stylings of Murray–the red Wiggle–but they made me learn piano instead. I protested by refusing to practice for the first five or six years I played. I like the piano because it’s such a fundamental part of so many different types of music. The fact that most solo pieces for other classical instruments rely on piano accompaniments makes the piano hugely important as a background instrument. At the same time, solo piano music is incredibly varied and really fun to play.

What do you do with piano outside of Winsor?

I take lessons with the same teacher I’ve had for 12 years. At various points, all three of my brothers have taken piano lessons with her, too. I’ve played duets with two of my brothers, and my youngest brother, who turned six in November, just started taking lessons this year, so we will most certainly be performing a legendary duet at our recital this spring.

Why did you originally join Upper School Orchestra?

I was new to Winsor my freshman year and I knew I liked music, so I figured it would be fun to play with other people. My middle school had a more traditional, bigger orchestra, and there was no spot for a pianist.

How has the group changed since you joined/its founding?

I think the main change I’ve seen is the group finding more direction. As a new group, it was hard to figure out how committed we wanted to be. We’ve been making more of an effort to establish common goals as a group, and as a result, our preparation process for performances has gotten much more efficient. We also got to perform at graduation and have worked with Small Chorus and Chorale a few times, which has been really fun! Also, when I started, everyone was new to Orchestra, so it’s fun for me to be able to use my experience from the past four years to inform how we function now.

What are some fun facts you want the Winsor community to know about you?

I have a black belt in tae kwon do and a dent in my leg from falling onto a fake pipe.