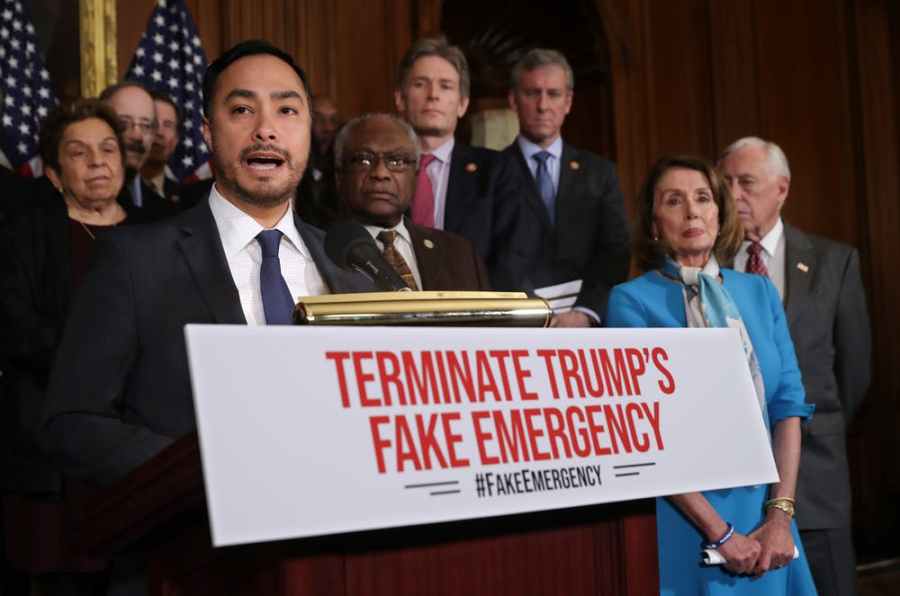 President Trump declared a national emergency on Friday, February 15 after Congress failed to grant him $8 billion for border wall construction. In December, a partial federal government shutdown occurred when Trump refused to fund parts of the government until Congress agreed to fund his border wall. The record-breaking 35-day shutdown ended when Trump signed Congress’ revised budget plan that included only $1.375 billion for new border barriers, 2.3% of what Trump requested. After signing the new funding agreement, Trump declared a national emergency, which allows the president to divert funding towards specific projects that are deemed an emergency. Trump said that he will use that authority to fund the wall on the southern border.

With his campaign for re-election in 2020 in mind, Trump has remained adamant about the wall, as it is a campaign promise he must deliver to maintain support from his base. In a press conference on February 15, Trump announced his plan to call a national emergency, citing that the U.S. has “an invasion of drugs and criminals coming into our country”—the invasion being a potential threat to national security.

After Trump declared a national emergency, lawsuits alleging that the president’s actions were unconstitutional were filed from 16 states. The lawsuits say that “contrary to the will of Congress, the president has used the pretext of a manufactured ‘crisis’ of unlawful immigration to declare a national emergency and redirect federal dollars appropriated for drug interdiction, military construction and law enforcement initiatives toward building a wall on the United States-Mexico border.” The plaintiffs claim that Trump misused executive power to defy Congress’ wishes to spend taxpayer dollars on what some recognized as a fabricated “emergency,” since illegal border crossings are statistically lower than Trump claims.

Sarah A.-R. ’20 shared her opinion on the constitutionality of the national emergency. She said that she “personally finds Trump’s ability to fabricate an emergency in order to seize money to pay for his wall problematic [even] though specific actions or reasonings are neither delineated nor explicitly prohibited in the Constitution.”

Trump seemingly agreed with the view that his “national emergency” might not be such an emergency after all. After declaring it, he said that he “didn’t need to [declare a national emergency], but I’d rather do it [build the wall] much faster.” This admission that the crisis is manufactured undercuts his own argument that the border situation requires immediate emergency action.

Trump also seemed to recognize his actions would be contested in court. When announcing the emergency, he told the press that “we will then be sued, and they will sue us in the Ninth Circuit… And we will possibly get a bad ruling, and then we’ll get another bad ruling. And then we’ll end up in the Supreme Court… And we’ll win in the Supreme Court, just like the ban.”

This use of executive power attracted critics from both sides of the political aisle. In a joint statement, Speaker Nancy Pelosi (D) and Senate minority leader Senator Chuck Schumer (D) said that the President’s attempt to go against Congress’ decision is “plainly a power grab by a disappointed president, who has gone outside the bounds of the law to try to get what he failed to achieve in the constitutional legislative process.” Some Republicans also agreed with these Democrats; Republican Senator Lamar Alexander called the emergency “unnecessary and unwise.”

Many citizens and politicians alike share the view that Trump’s national emergency is unconstitutional because the border crisis might not be an emergency. But, Trump has been uncompromising about the creation of his wall, even if it means bypassing Congress’ decision, as it is a promise he cannot afford to lose.

didn’t grab a hard copy today at Winsor? want to catch up on Winsor news? check out our online publication @issuu or The Banner’s website (link tree in our bio!!)
caught our lovely backpage editors laughing about their new crossword 🤩 did you know? Becca can whistle happy birthday backwards, and Helen is known to burst into tears every time she starts to whistle because of how beautiful it is. Look out for the next edition of the backpage!!!!!
meet your Banner Arts page editor and assistant editor: Elly Pickette and Jessica Wei!!!!! try to guess which Spotify wrapped goes to who!! Feel free to chat with them about your favorite artists, and check out the arts page online for more :)
are you caught up on winsor news?!! make sure to check out the online banner if you missed a paper copy!