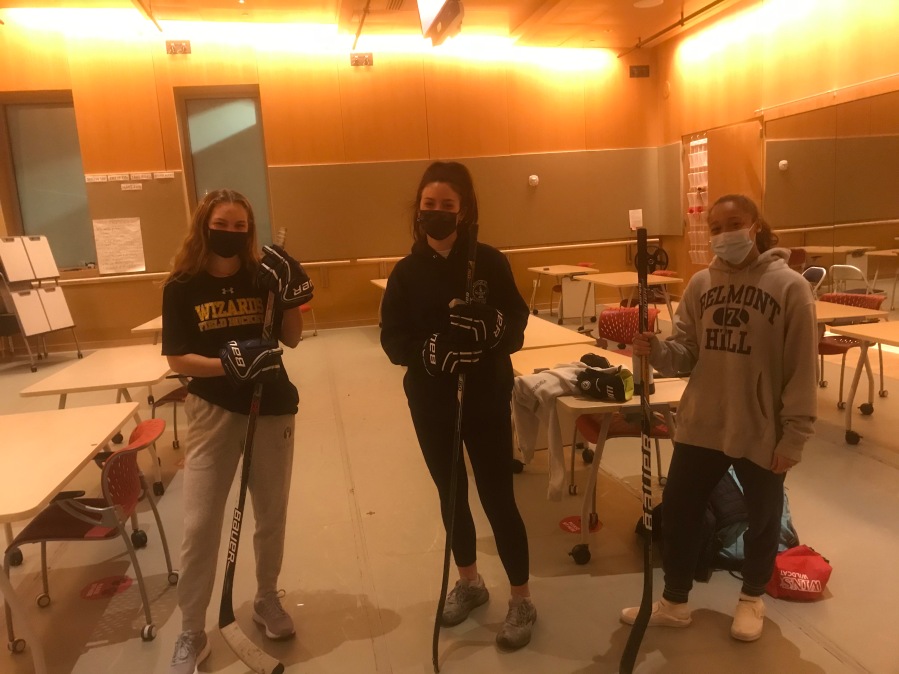 As Winsor’s winter sports season kicks into gear, the COVID-19 cases in Massachusetts continue to rise at a rapid rate. Each sport – squash, basketball, swimming, and ice hockey – has a hybrid practice schedule, with two on-campus practices and several virtual practices for team bonding or being active. The winter sports teams are keeping their spirits up for this unique season and prioritizing safety during their time on-campus.

Squash coaches have implemented a system in which the team of about twenty is split into two groups that practice at different times. Due to the enclosed spacing of the squash courts, Phase One practices consist of solo drills with mandatory mask-wearing and social distancing. While one player is on court, the player outside the court completes fitness drills, stretches, and even fun brain exercises like “Scattergories” to keep up the team’s competitive spirit. Phase Two practices would allow for two or more players to hop on court.

The swim team has developed an alternative to using the Simmons pool, which remains off-limits at this point in this season. Their practices consist of dry-land fitness and conditioning until they get back in the water in January, barring any complications from COVID. Delaney H. ‘22 explained that they “are also doing a team challenge to run a mile every single day until the new year.” This goal aims to unite the team and increase spirit and enthusiasm.

The ice hockey team is hitting the turf in addition to the rink this year. While lower schoolers go to the rink Mondays and Tuesdays, upper schoolers practice  on campus with balls and sticks on the turf on Thursdays and head  to the rink on Fridays. On off-campus days, they do asynchronous workouts and may introduce Zoom workouts into the practice time. Scarlet P. ‘22 explained that “Until the COVID restrictions loosen up, we will be doing mostly skating and passing drills on the ice. Then, when things loosen up, we can start to practice some more game-like drills.” Watch out for ice hockey the next time you pass the turf!

Finally, the basketball team had their first in-person practices last Thursday and Friday. On these on-campus days, players warm up, participate in conditioning and ice breakers, and are separated into potential JV and Varsity groups. MaryKate H.  ‘22 recalled, “we ball-handled in groups, worked on fundamentals, and did some activities to practice shooting, communication, and teamwork.”

Although Winsor is not able to compete with other schools this winter season, coaches and teammates have certainly made the best out of the situation and created unique and fun ways for the teams to practice and bond. If the situation allows later in the season, teams may be able to participate in friendly competitions with one another and simulate the exciting games and matches that the winter season usually holds.